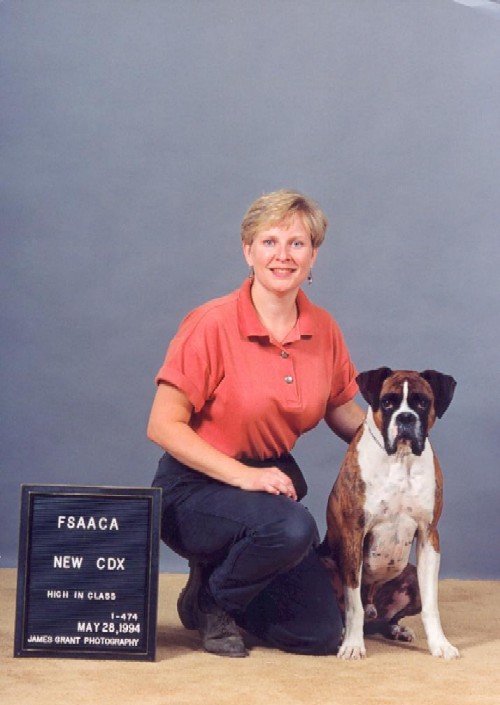 
Kafka (Ch. Starview's Chance of September x Starview's Winnie of Picadilly, CDX) was bred by Karen & Don Harrison (Starview Boxers) of Tofield , Alberta, Canada.  Kafka was my first Boxer and first Obedience dog.   I waited 16 years before getting Kafka and he certainly was worth the wait!  I remember first meeting Karen Harrison in the spring of 1990 & telling her that all I wanted was a "pet" Boxer.  Kafka was whelped at the home of  Eija Fairbridge (friend of the Harrison's).  Eija's children named the puppies,  Kafka's puppy name was "Adventure" & what an adventure he has been!

At 10 months of age Kafka suffered a horrible accident and fractured his neck. He was sent to the University of Saskatchewan Veterinary College (6 hours away) where he underwent 2 1/2 hours of  x-rays (under anesthetic) in order to determine exactly where the fracture was, followed by a NINE hour surgery & a blood transfusion. Kafka was hospitalized for approximately 4 weeks...after which time it was felt that he may not be able to do higher level Obedience (which involved jumping) as his neck ligament would be abnormal. I was devastated...but at least I still had my sweet boy that would continue to live a happy & healthy normal life in every other way...I was VERY thankful for that!

Well...I never would have dreamed  that my "pet" Boxer would someday achieve Dual Championship (Obedience & Scent Hurdle racing) status & become #1 Boxer in Obedience (see chart below)  in the Dogs in Canada Top Obedience Dogs ratings.  Kafka was a very gentle, sweet boy that seemed to want not  much more in life than to be my side & try to please as best he could.  It is because of Kafka that I am now totally devoted to Boxers!  You can see Kafka's achievement's in the chart below. 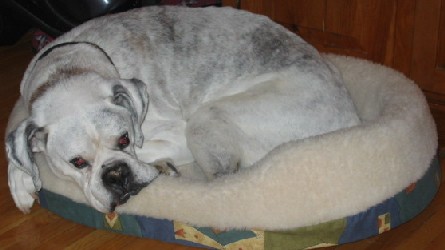 
Back to "Summer Boxers" homepage

This page was created on October 30, 1997 by Josie O'Reilly & updated on November 11, 2008 can be reached via e-mail at: boxrlady@telusplanet.net