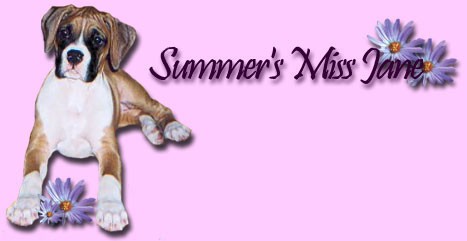 I often wonder why I lost Miss Jane so soon...it seems like Jane came here to give me her one and only litter...her job was done & she left...sweet Jane...seems so unselfish of her...but it also seems like her whole life was like that, always just waiting to see what I would ask her to do next...she just always wanted a job to do...& then she was SO HAPPY to do it. She was the best mother I have ever seen...she did a fabulous job at that! (Read more about Miss Jane below her photos).

We bred Miss Jane to "Apollo"- Am. CH. Mi-T Distinguished Gentleman and had a beautiful litter of 5 puppies on September 4, 2006 that are now all in their homes.

Jane had also successfully completed a 12 week Novice Obedience class which she was awarded a certificate & Novice polishing.  Jane & I had also taken Agility (Jan/Feb 2006) and Rally-Obedience (April - August 2006) classes...keeping up to her was always a riot as she lived her life in Fast Forward!

Back to "Summer Boxers" homepage
Back to "Litters" page