Stella is the foundation of  Summer Boxers, her outward beauty and her pedigree have gone on to produce beautiful Boxers  for many generations. Stella was bred by Sharon & Ron Berry (Berlane Boxers), sired by the great Am.Ch. Bridgewood's B. K. Kahuna, SOM LOM. and out of their natural eared classic girl  Berlane's Just Causin Kaos, DOM LOM.  Stella's dam "Kaos" is a Am.Ch. Rochil's Grande Marshall, SOM daughter.  In 1996 I attended the American Boxer Club (ABC) National Specialty in Frederick, Maryland, USA.   I was on a mission to find the potential sire of my next Boxer = Stella. While at the ABC National I saw Am.Ch. Rosend's Bo Didley, SOM & Am. Ch. Rosend's Uptown Girl, DOM LOM and thought to myself : " I want a puppy out of their sire!"  When  Sharon Simpson (Zephyr Boxers) & I saw Ch. Rosend's Uptown Girl in the show ring we simultaneously began to sing the song: "Uptown Girl" at ringside. We had to quickly stop as we were louder than we realized & handlers (in the show ring) were looking around to see where it was coming from.  It was a hilarious moment & one I'm sure we will never forget. (That was the first time I met Sharon Simpson).

Shortly after returning from the ABC,  I was very fortunate that a breeding of  "Raider" to "Kaos" was in the works! My excitement had to be  tolerated, at times I am sure, as I  involved myself in the 'planned parenthood' of my new puppy.  Bonding with Stella began long before her conception!  I participated in: x-rays of  Kaos to determine the number of puppies, whelping of the litter, lengthy weekly visits of the puppies, tattooing, micro-chipping & ear cropping at the veterinary clinic. This has been very important to me and meant so much. Stella is from a litter of nine, two of her littermates are MBIS MBISS Am/Can Ch. Berlane's Causin An Uproar CDX, A/C SOM, LOMC ("Sabre") and Am/Can Ch. Berlane's Wish Upon a Star, A/C DOM, LOMC.

Stella achieved her Championship as a senior puppy at 10 months of age.  Stella was my first "show"dog.  Together we learned alot about conformation.  Stella was exclusively owner handled (by me) and became a Multi-Best of Breed winner & Group placer. Stella also achieved her C.D. (Companion Dog) Obedience title from the Novice B class.  She was trained in Open & Utility . Stella took a break from her Obedience career to have two litters & then enjoyed being a "stay at home grandma" to her grandson "Mr. Spock" (sired by her son "Dash Riprock") & great granddaughter "GiGi" ("Mr. Spock's" daughter).  Stella became a Canadian Dam of Merit in January 2003. 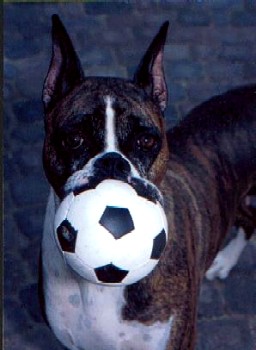 Stella was a ball freak & almost always had a ball or toy in her mouth. She would greet me with "gifts", inviting me to play, everyday when I returned home from work. This characteristic is being passed on to many of her grandkids & great grandkids.
(Stella pictured at 5 1/2 yrs of age - photo by Leslie Degner)

Stella is the dam of 6 Canadian Champions including 2 Am/Can Champions, 2 Am/Can Sire's of Merit (each of these boys has an American Specialty win &/or an Award of Merit, Multi-BIS, BISS, BPIS wins and both are Top Sires in Canada). Both of Stella's litters were linebreedings on Am.Ch. Rochil's Grande Marshall, SOM.

You can see Stella's achievement's in the chart below.

Back to "Summer Boxers" homepage
Back to "Past Litters" page